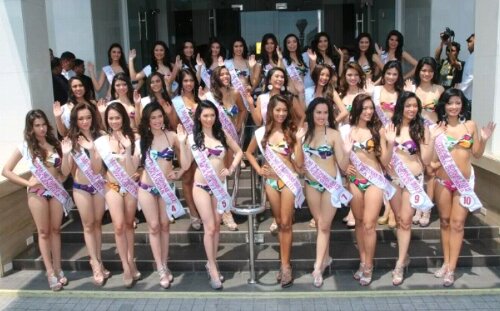 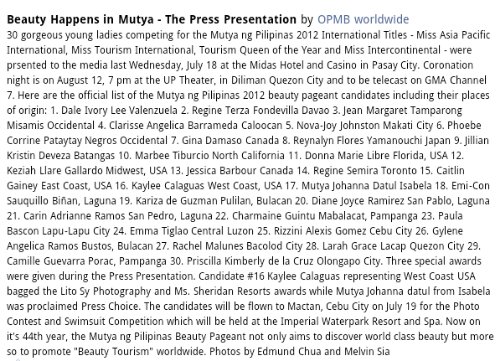 The report made by OPMB Worldwide (courtesy of Noli Berioso) listing the names of this year's hopefuls. In yesterday’s Press Presentation of the Mutya ng Pilipinas 2012 at the Midas Hotel and Casino in Ermita, Manila, 30 beautiful delegates were presented in the last national beauty pageant for the year. There were a few familiar faces in this batch, particularly Rizzini Alexis Gomez (who took part in Miss World Philippines 2012) and Kaylee Calaguas (an entrant in the Miss Philippines Earth 2012). Will these two be more successful in their sophomore attempt at winning a crown? Or will newbie Mutya Johanna Datul beat them to the draw?

The grand finals of Mutya ng Pilipinas 2012 – which promotes ‘Beauty Tourism’ – will be held on August 12 at the UP Theatre, to be telecast by GMA-7. The winners will (hopefully) represent the country in the Miss Asia Pacific International, Miss Tourism International (Malaysia edition) and Miss Intercontinental.

Good luck to all the ladies! 🙂