According to the scoopbox of PEP.ph, here are some of the celebrities who are rumored to be part of the castaways for the 3rd season of Survivor Philippines: Celebrity Edition. Quoting the scoop from their website:

Sexy actress Aubrey Miles: will she redeem herself in Survivor Philippines after the Amazing Race Asia debacle?

This should be interesting…Princess Snell is a bratty and tactless girl who can create friction among the participants. I can see her colliding with Michelle Madrigal and Aubrey Miles. On the other hand, Bench man Jon Hall and Brapanese TV personality Akihiro Sato will definitely be vying for strength and good looks. They are hunks who can handle the show’s physical challenges without a doubt. On the other hand, model Ervic Vijandre is more known as the ex-boyfriend of Marian Rivera, while Solenn Heussaff is a Fil-French upcoming singer and occasional Party Pilipinas co-host who happens to be the sister of Erwan – the present boyfriend of actress Anne Curtis. Of course, we all know who Elma Muros is. An athete and track-and-field coach who made the Philippines proud in the SEA Games and Asiad during her time, she will surely give the boys a run (pun intended) for their money.

Real-life sweethearts Michelle Madrigal and Jon Hall are rumored to be part of Survivor Philippines: Celebrity Edition. Will their relationship survive the ordeals and challenges of the show?

Another notable casting detail is that Michelle Madrigal and Jon Hall are currently dating in real life…so it would be intriguing to see the dynamics if they end up in opposing tribes. What would be nicer to watch is how they will handle themselves if they reach the merge and the individual challenges start unfolding. 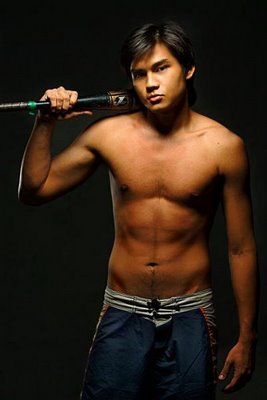 Ervic Vijandre, ex-boyfriend of actress Marian Rivera, is also tagged as part of the show.

Athlete Elma Muros during her prime...will she outrun and outjump the guys in Survivor Philippines?

Meanwhile, a separate spoiler from Pinoy Exchange spilled the beans on “Born to Be Wild” host Dr. Ferds Recio being one of the castaways…how true?

Another rumored castaway...Dr. Ferds Recio (together with host Richard Gutierrez) who headlines the eco-adventure show 'Born to be Wild' in a shot not related to Survivor Philippines.

But what I’m interested most is knowing where they are presently filming the whole show…All is know is that they are in a jungle island which is definitely outside the Philippines, as per the rules of the show.

Let me hazard a guess or two….could they be in a remote part of Malaysia or Thailand? Or possibly another island in the Pacific like the Northern Marianas, Guam or Samoa? We’ll see…..keep tuned to this blog for more juicy tidbits about Survivor Philippines: Celebrity Edition. Welcome to the Jungle! 😉