The Philippines’ Wedding of the Year

It’s supposed to be the most grandiose and high-profile wedding in the Philippines this year, complete with a gigantic reception planned to be held inside the Araneta Coliseum (talk about a humongous reception venue that’s more than 10 times the size of the church itself) which should accomodate the thousands upon thousands of guests to the same. But the calamitous months of late September and early October took a toll on all the wedding plans and everything was re-organized for simplicity (read: austerity), albeit highly-publicized and tri-media covered the event went. 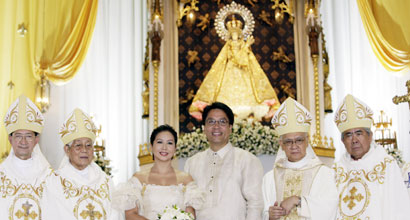 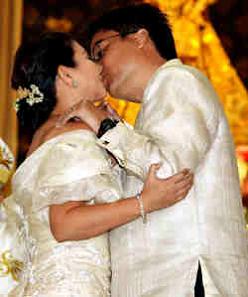 image courtesy of The Philippine Star

Senator (and Vice-Presidential aspirant for the 2010 elections) Mar Roxas and Broadcaster Korina Sanchez exchanged vows last October 27 afternoon at the Sto. Domingo Church in Quezon City. It was a well-attended event that filled the church to the rafters. The combination of the well-heeled crowd, political personalities, showbiz hotshots and relatives/supporters of the couple contributed to a nice mix of individuals who want to take part in this highly-anticipated wedding.

Korina was particularly resplendent in the wedding gown made by designer Pepito Albert while the good Senator wore a geometrically-designed Barong Tagalog courtesy of Randy Ortiz. 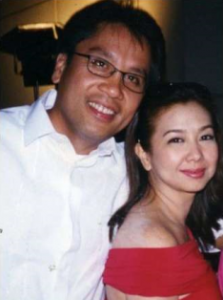 Prior to the same, the couple actually donated the entire amount of their wedding reception cost to various charitable organizations that would help the victims of Typhoons Ondoy and Pepeng. Instead of spending millions for what could be the biggest wedding reception ever in the Philippines, the two opted for a simple meet-and-greet with the guests right after the ceremony in the church courtyard. Thereafter, they rode a topdown Mercedes Benz and headed to the Araneta-owned White House in Cubao for a ‘scaled-down’ dinner get-together with very close friends and guests.

Here are video highlights of the wedding as covered by ABS-CBN:

Personally, I appreciate the couple’s gesture of doing away with their big reception given the current crisis being experienced by the country because of natural calamities. I’m sure it took Korina a long while to accept this second part of the double whammy she experienced (the first was when Senator Mar stepped down from his Presidential bid to give way to Senator Noynoy Aquino – one of their principal sponsors in the wedding) but eventually accepted reality as it really is.

Anyways, Senator Mar and Korina will soon leave for a quick honeymoon in Japan, but have also scheduled a longer counterpart in Italy come December. As we say in Tagalog, Mabuhay ang bagong kasal! (Long live the newlyweds!)